If you are looking for a peaceful seaside place to relax and enjoy the sun and the sea without the crowds, then Brist is an ideal place for you. Situated on spectacular Makarska Riviera, 40 km away from Makarska, is located between the dramatic Biokovo and the amazing Adriatic.

It is located along the coast with its 450 inhabitants.

Brist is a charming little place with numerous historical and cultural monuments to explore such as medieval tombs, locally known as the Turkish tomb and the baroque church of Sv. Margareta.

The name of the place originates from the birch tree, and it was first recorded in 1571, but is much older than many archaeological finds. The medieval stećak in the old village, above today's settlement, also points to the old traces of the settlement in Brista.

Stećak was decorated, and the people called him Turkish tomb.

In the old village there is the church of Sv.Margarita, which is supposed to be erected in the 15th century. From it was preserved an apse with a Gothic vault, embedded in a ruinous baroque church. Around the church are the remains of an old settlement and stone houses.

In the apse of the church are the tombstones of the Kačić family.

In one of the stone houses near the church according to the tradition, Andrija Kačić Miošić, one of the most famous Dalmatian poets, was born by the author of the 'Razgovor uodni naroda slovinskog'.

Brist is the birthplace of several other important personalities of Croatian culture, among which a special place is occupied by Mladen Veža, one of the most important Croatian painters of the newer era. Mladen Veža has most of his works with motifs of Brist donated to the monastery in Zaostrog, in which they are a permanent exhibition.

From it was preserved an apse with a Gothic vault, embedded in a ruinous baroque church. In the apse are the tombstones of the Kačić family. Around the church are the remains of an old settlement and stone houses. 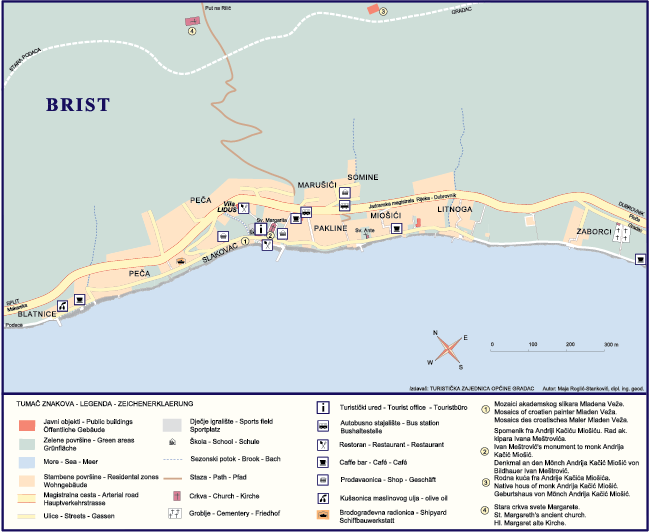 What brings most people to Brist is the azure Adriatic Sea and Brist does not disappoint. The Brist sea is crystal clear, and the round pebble beaches are easy on the feet.

For those days when it's too cold to swim, you can take a mountain bike ride up the Brist cycle trail which winds its way up the mountain, taking you to some breathtaking panoramic views of the sea and countless islands. Be sure to bring your camera along so you can capture the moment.

When it comes to gastronomy, Brist is a fishing village, so authentic Dalmatian seafood cuisine is on every menu at the local restaurants.  Be sure to try crni rizot (black risotto) and grilled sea bass, both are the heart of Dalmatian cuisine.

EXCURSIONS TO SURROUNDINGS AND BOAT TRIP

Brist is located within close proximity to Gradac and Podaca, or you can take a short boat ride to get to the world famous Hvar. If you’d like to drive a little further Brist lies between Split and Dubrovnik so you can easily take a day trip and visit them both.